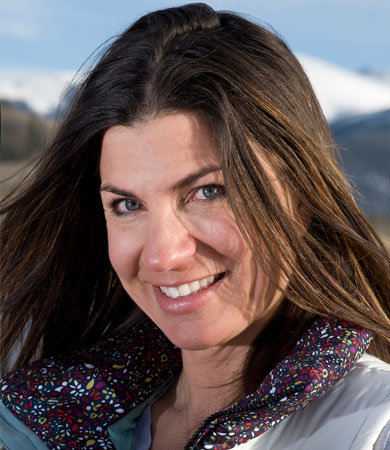 Ever wonder what it is like to hurdle down a mountain on two skis at speeds up to 70 MPH virtually blind, relying on verbal cues from your guide a few feet in front of you? This is what Danelle Umstead does every day.At the age of 13, Danelle was diagnosed with Retinitis Pigmentosa, a genetic eye condition where the retina progressively degenerates and eventually causes blindness. She has no central vision and is losing her peripheral vision. Currently, her spotted vision limits her sight to less than five feet without any detail.

Danelle’s father, Peter, first introduced her to adaptive skiing in 2001, in Northern New Mexico. He promised to be her eyes on the slopes. Danelle was in a horrible place at that point in her life- having just lost her mom, sight, and essentially her will to live. She was hesitant to ski, feeling as if blind people couldn’t do anything, let alone ski down a mountain. But, from the moment she felt the rush of the mountain air against her face and the snow underneath her skis, she was hooked. She had a new vision for her life and began training to overcome her disability and focusing on all of her abilities.

Skiing not only gave Danelle her life back, it also led to meeting her husband, Rob while skiing in Taos, New Mexico in 2005. Within a year, the two moved to Park City, UT to start a life together. Danelle and Rob would later marry at the top of the mountain in Utah and ski down in their wedding clothes. Little did they know that it would all lead to careers as a dynamic alpine skiing team.

Danelle’s severe vision loss requires her to ski with a guide and when she began training full-time in 2006, she struggled to find a consistent guide. That is until Rob took the job full-time in the summer of 2008. Rob had skied his whole life and skied competitively in college for the University of Massachusetts. He was a veteran racer, coach, and then the perfect guide for Danelle.

As her guide, Rob skis a few feet in front of Danelle and acts as her ‘eyes’ on the course. He and Danelle wear Cardo motorcycle headsets where Rob is constantly communicating about where to turn, when to catch air and what to feel with the terrain. The amount of trust that Danelle has in Rob is truly remarkable and has created a unique bond on and off the mountain. Together, they make up Team Vision4Gold. “Vision,” Umstead says, “is to have sight, an idea, or a dream.”

Danelle and Rob made history at the 2010 Vancouver Winter Paralympic Games as the first husband and wife visually impaired ski race team to compete and medal for Team USA. They earned Bronze Medals in both the downhill and super combined events in Vancouver and ended that season, with the overall and super G World Cup titles.

Soon after the 2010 Paralympic Games, Danelle was diagnosed with Multiple Sclerosis, an unpredictable and often disabling disease of the central nervous system. Another unexpected challenge in her life, Danelle tackled it head on and refused to let it deter her training.

The dynamic husband wife duo also earned a Bronze Medal in the super combined at the 2014 Sochi Winter Paralympic Games.

The Umsteads are proud parents of their son, Brocton, who is nine years old. One of the main lessons they are teaching their   son is that, “people with disabilities can do amazing things.” Danelle embodies this lesson so much that when Brocton was watching Ted Ligety, one of the world’s best able-bodied skiers, Brocton asked what disability he had. Brocton had assumed that all world class athletes have disabilities.

Team Vision4Gold competed at the 2018 PyeongChang Winter Paralympic Games- an experience they were excited to share with their thirteen-year-old son, Brocton.

In 2020, Danelle will launch her charitable organization called Sisters in Sports Foundation. The foundation’s mission is “To Empower a Community of Girls and Women With Disabilities Through the Love and Involvement of Sports.”

Danelle is starting to write her memoir targeting a launch around the 2022 Paralympic Games. Danelle and Rob are also training to once again represent Team USA on the world stage in Beijing.